1. What is the Bugnet method?

The aim of this therapy is to repair or improve the harmony in the mutual force relationship in the musculature. This implies that the main part of the therapy consists of increasing the power of the weaker muscle groups and allowing them to function in harmony with the stronger muscle groups.

In other words: strengthening the weaker muscles and therefore the function improvement of the whole loco-motoric equipment. Weaker muscles can be favourably influenced by making contracted antagonists suppler. Therefore attention is also paid to the treatment of contracted muscles. The distinctive features of this therapy are the exercises in their totality, in which the patient maintains his posture in closed chains against a progressive, increasing to maximum, resistance.

Posture reflexes go into operation: resistance and muscular manipulations provide the sensible stimulus that results in a motoric reaction via the afferent part of the reflex pathway. These essential characteristics are expressed in the name given to this method of treatment: posture resistance therapy.

2. For whom is the Bugnet method?

The method can be used as part of the treatment of neurological, orthopaedic disorders and deviant posture. Examples:

The Bugnet method is very suitable for creative use. The application of the basic principles widens and deepens exercise therapy for the patients. The results of consistent application are often surprising and very favourable.

3. How is the Bugnet method applied?

The posture resistance therapy exercises are described and illustrated in the book “Muscle Training with Postural Resistance”: see - publications.

Depending on the defect for which the exercises are prescribed, one must question in which total posture schedule the deviation can be correctively influenced. The muscle groups must be considered in their 'joint function', that will say the fixed segment and the 'motoric' segment functions are interchangeable. This means that it must be realised that the femur, for example, can be placed in adduction with respect to the pelvis, but also the other way round, the pelvis in adduction with respect to the femur. This is important in the choice of starting position as well as the resistance.

The starting position is determined by the posture schedule chosen to correctively influence the defect. The weakest muscles are placed in a favourable position at a joint angle that is less than half the complete mobility angle: Weak muscles are therefore not stretched over the joint to the maximum. Contracted muscles may be fully extended, so over as large a joint angle as possible. The joint chains must be closed, first of all for the treatment part and then for the rest of the body. The chains are closed by means of fixed handholds and/or foot supports, so that the extremities find a fixed point to be pushed or pulled against.

When the patient has actively taken the starting position and exerts his energy from the centre of the trunk (through stabilisation of the lumbar spinal column; a so-called pelvic tilt) resistance can be given to further stimulate a particular part of the body. The intensified contractions which occur as a reaction to the resistance continue on from joint to joint and also cause intensified reactions in closed chains in other parts of the body. The pushing or pulling resistance, if possible with rotational elements, is increased to a maximum, in other words until the maximum force is reached in the weakest link of the kinetic chain. The aim of increasing the resistance to a maximum is to reach maximum co-contraction and hence an 'overflow of excitation', through which the weaker muscles can be activated. Muscular manipulation can support the contraction of weaker muscles. The resistance is increased to a maximum, not only by increasing the force of the resistance but also by involving more mutually antagonistic muscle groups. In this fashion a sort of mutual struggle occurs to maintain the position of the joint. This 'struggle' can be increased until the maximum co-contraction is obtained. It must be realised that the antagonistic function not only has to relate to one joint (peri-articular muscles), but that peri-articular muscles groups of various joints can contract in a mutually antagonistic function with the accent more on the various functions.
Example (comparable manual, exercises I.8a): strengthening the m. deltoideus anterior. 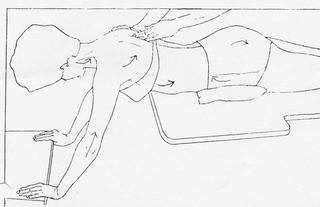 fig 1. Support function of the arms.

When the arm is trained in a supporting function, flexors and extensors in contraction simultaneously can be found around the elbow joint to stabilise the elbow (peri-articular muscles from one joint) with the accent on the extensor function. For the shoulder girdle this means: peri-articular contraction with the accent on the abduction of the humeroscapular part and the adduction of the vertebroscapular part; the accent lies on the flexor function for the cervical and lumbar spinal column and on the extensor function for the hip. Therefore it can be seen that to stabilise the trunk from a fixed point on the hands, peri-articular muscle groups from several joints contract in mutual antagonistic function.

In what fashion can a 'struggle' between different muscle groups be brought about and can this intensify the action a weak muscle group which is to be treated?

Because the patient, who has actively taken his starting position, uses his energy in one place in a closed chain (pelvic tilts, for example) the posture reflex mechanism connects with contractions in all muscle groups. The force of the contractions is in proportion to the force the patient develops on that one place. The contraction of all the muscle groups increases in proportion by applying posture-threatening resistance to the body. The physiotherapist ensures that the flexion-extension, adduction-abduction as well as the endorotation / exorotation components are activated ('struggle') through the resistance he applies. Then the resistance is slowly intensified until maximum co-contraction is reached. The so-called phenomenon described by Kabat as 'overflow of excitation' comes about where weak muscles in a static function are activated in a reflexive fashion as stabilisers.
Build up complexity by varying the starting positions. A start is made with symmetrical exercises. These must be mastered before continuing on to the asymmetrical exercises.

A starting position 'lying on stomach' (in accordance with the following stage in ontogeny) is especially useful for treating weaker extension of the spinal column (see book: A. 9, A. 10, G. 6).

Exercises in the 'sitting position' are comparable to the four-footed stage of human development. This starting position is particularly suitable for treating trunk-extremity muscles (manual: D. l, D. 2, D.3, G. 3, G.7, 1.2, ·I.3, 1.4, I.5, I.6) and for stabilising the correction of anterior-posterior and lateral curving of the spinal column (manual: Hkn B, C, G and H). For exercises in a sitting position there must be sufficient strength in the trunk muscles to keep the spinal column vertical against gravity, or the extension of the spinal column must be protected by cervical traction, for example by means of the Glissonse Lis (manual: G.7 and HK H ).

The 'upright standing position' is ontogenetically speaking the last phase of development. This is therefore the most difficult starting position, especially in regard to the position of the upper legs in respect to the pelvis. Control of the hip and pelvic position is essential because support reflexes from the foot can only be profited from to a limited degree when there is insufficient control. The position of the mm.gluteus maximus is interesting here. These muscles are not only extensors of the hip joint but also powerful exorotators of the femur. To reach maximum co-contraction in the upright standing position, the extensor function for the stabilisation of the pelvis must be used as well as the exorotator function. This function can be activated by endorotational resistance to the upper legs (compare manual: A. 16). The mm.gluteus maximus must be strong enough for the upright standing position to withstand the pelvis (and therefore the trunk) falling forwards in the hip joint and to stabilise the pelvis during daily living activities, such as lifting and pushing. This is also the reason that during Bugnet posture resistance exercises the function of flexors in the lumbar spinal column and extensors in the hip are trained at the same time.

The upright standing position is thoroughly prepared first in the prone position with extended knees on the treatment table (manual: A. 13, A. 14, A.15, E.18, J.1 J.3, J.7a, J.7b) and also the lying on the stomach position (G.2, J.2). Via the reaction to resistance that is exerted at different places, the patient experiences the automatism of the stabilisation of the so-called 'fixed points' and exerts force and movement from these fixed points. Consequently the patient is trained in the self-stabilisation of the 'fixed points' and then without resistance. Only then can the exercises in an upright standing position be started, half-weighted (E. 19) as well as weighted (A. 16, A. 17, E.20, G.4, G.8, J.13, J.14). Progress in the complexity of the exercises is introduced by varying the starting positions.

We will use a contraction of the Achilles tendon as an example. The M.E. is given in the proximal direction to the m.soleus especially, while this muscle is placed over a support point (S) and extended to a maximum (see fig. 3). 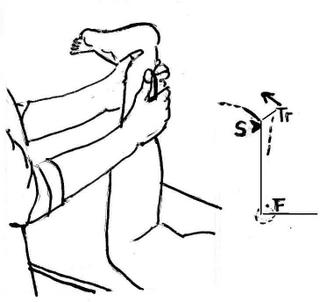 The patient reacts to this M.E. by crawling out as it were from under the M.E. with the distal bone segment (the calcaneus) over the support point (S.) that lies on the ventral side of the tibia. In this manner the joint angle becomes greater. The M. E. on the contracted m.soleus stimulates the action of the dorsal flexors of the foot in a reflexive manner. The determination of the support point (S) over which the contracted muscle is extended and the choice of the direction of the M.E. is of great importance in treating myogenic contractions.