Physiotherapy with two patients with the Hypermobility Syndrome

2.4 Method and objective of the treatment

2.6  Procedure and collaboration by physiotherapy practices

4 Summary of the treatment of two patients with Hypermobility Syndrome in accordance with the Bugnet method.

In practice it appears that a diagnosis is often lacking for patients with symptoms of hypermobility; doctors and physiotherapists often overlook hypermobility. Effective treatment is not really possible without an explicit diagnosis. Hypermobility can be recognised by means of a simple and quick diagnostic test (Beighton, Bulbena, among others) with which a doctor (rheumatologist or clinical geneticist) can make the diagnosis. The physiotherapist has an important observational function because the patient often presents the complaints to him first. Local and variable symptoms of pain and strain can be treated but the result is often temporary.

Due  to stability problems with the posture and movement equipment, patients with hypermobility of the joints land in a vicious circle of increased of loss of stability and joint symptoms, chronic pain, tiredness and a decline in the general condition. The number of subluxations increases and the propriocepsis and proprioceptive feedback decreases, which in the case of hypermobility are less anyway. The loss of use and movement also reduces the quality of the supporting and connective tissue and the muscle and bone tissue.

The patient may become isolated due to the nature of these symptoms.

Listening to and observing the individual patients, additional training, experience and combining these things with the Bugnet method in particularly gave me the insight to see that this method is handpicked to help the group of patients in question. Over the years I have compiled an exercise plan and a fitness programme, based on the principles of the Bugnet method and specifically aimed at this group of patients. During the last years this treatment in our practice has proved to have a very favourable effect.

For more information you are referred to the existing literature and the general section about hypermobility on this website.

In March 2010 two sisters with extensive and serious symptoms on the basis of hypermobility reported to our practice. The parents made contact after they had read on this website that the Bugnet method is also used to treat persons with symptoms of hypermobility/ hyperlaxity.

The girls said that they had increasingly more problems with posture and movement. They noticed a decline in every day movement and experienced trouble with sports, chronic pain symptoms and tiredness and an increasing number of subluxations of proximal and distal joints.

After the usual physiotherapeutic intake, inspection and examination during which the hypermobility could be confirmed with existing tests, specific posture and movement and the muscle functions such as strength, length, coordination and stamina were examined. The girls scored low, the oldest could actually be described as a ”bed-chair” patient.

Because hypermobility is in fact a symptom and not a diagnosis and can occur as part of a more extensive syndrome, having a doctor make the correct diagnosis was considered. Hypermobility is a symptom of hereditary syndromes such as Ehlers Danlos and Marfan, but can also occur by itself with general or local hypermobility of joints.

The correct diagnosis is of essential importance in determining the future path in health care. In this case the parents and children were referred to a clinical geneticist after consultation with their family doctor. He diagnosed Ehlers Danlos (III respectively IV) in the girls. The patients remain under the supervision of a rehabilitation doctor and continue their physiotherapy treatment.

2.3 Request from the patient and parents

Many attempts with regular physiotherapy have not improved the situation. Maintaining dynamic movement and postures is becoming more and more difficult, with an increasing number of subluxations and pain and fear. Parents and patients want to try to reverse the progressive deterioration of every day movement and function with this therapy, thus improving the quality of life.

2.4 Method and objective of the treatment

The objectives in order of priority are:

A programme has been developed over the years for patients with hypermobility with exercises based particularly on the principles of the Bugnet method. The exercises and the build-up must be very precise and be adjusted. The therapy is different for each patient.

The therapy starts with two exercises lying down which are repeated ten times, twice a day. See Bugnet method( link maken) for build-up. The girls exercise together and/or with the help of their parents, two sessions of about 15 minutes per patient.

2.6  Procedure and collaboration by physiotherapy practices

The girl's  local physiotherapist received the first information by email with photos of the starting postures and of her patients and the parents. With the increase in stability, reducing subluxations became more difficult for the parents. After discussions it was decided that the physio/ manual therapist would instruct the parents in this. Normally (sub)luxations are reduced by the medical profession. Knowledge and skill is essential to prevent damage.

The views of the patient and the mother can be found under patient experiences.

Due to the family's enormous motivation and the daily discipline in exercising (everyday 2x 15 min) progress was made quickly. This progress was charted by the physiotherapist treating the girls.

Within a year the number of subluxations had steadily decreased, the older girl's medication could be decreased from three times a day to twice a day in consultation with the doctor and is now half a Zaldiar tablet twice a day. More everyday activities could be undertaken, even activities with resistance could be carried out such as cycling, lifting, mowing the lawn, etc.

The number of subluxations of the large proximal joints decreased. Sometimes a subluxation of a distal joint occurred  (finger/wrist). There was an increase in number and duration of everyday activities, movement with resistance also continued to improve.

The method of moving had to be corrected sometimes: to gain stability the body finds solutions such as locking joints, the use of flexions/ adductions and clenching the legs against each other and the arms against the torso etc. In these cases the muscle corset is not being trained properly during everyday movement.

According to the family the rehabilitation doctor was surprised by the progress during the check-ups.

The girls now go to school by electrically-powered bicycle and in a normal bus, they do fitness training under physiotherapeutic supervision in which the basic principles of Bugnet are used, swimming, the youngest is trying various sports and the eldest has a job after school. They now feel as if they are leading normal lives.

The parents could go no further than 15 minutes from home because of the frequent and very painful subluxations of, for instance, hips and shoulders. The parents recently went on holiday for a week. The eldest girl went camping for week (hard mats, awkward positions, etc) and only had one subluxation during this week.

This case describes two girls with the Hypermobility Syndrome and how it is possible to improve everyday functionality and increase the quality of posture, movement and life by intervention with physiotherapy according to Bugnet Posture Resistance Therapy. This method can be a valuable addition to regular physiotherapy, particularly when static exercises are indicated to facilitate the transition to dynamic exercises at a later stage.

The personal stories of one of the girls and the mother (link) give a very clear picture. The story by the physiotherapist and the graphs (link) show that in this case the Bugnet method contributed essentially to the recovery. It is of great importance that the patients are very motivated to do the exercises and that they do them faithfully.

4. Summary of the treatment of two patients with Hypermobility Syndrome in accordance with the Bugnet method.

The names of the patients are fictitious for privacy reasons.

I have been treating two sisters with the hypermobility syndrome since March 2010.

Seeing as how I have not been qualified for very long (since 2004) I had never heard of the Bugnet method which was previously used mainly for polio patients. This method has been brought back to life by the Bugnet Foundation. The mother of the two sisters brought this method to my attention. She found a physiotherapist in Wassenaar on Internet who uses this exercise method, and others, with patients with hypermobility syndrome (HMS) and Ehlers Danlos.

The sisters went to Wassenaar in March 2010 and learnt the exercises there. I had contact with the physiotherapist there (on the other side of the country) by post and email and learnt how I could coach and train the sisters. In addition the physiotherapist from Wassenaar came to the Achterhoek to instruct our team so that we could continue the therapy in our own town.

Stability is of essential importance for gaining and retaining coordination, functional posture and movement patterns in daily mobility (see website). Training could not be given according to the regular dynamic method because of the many subluxations that occurred and for this reason we started to train according to the Bugnet method (posture resistance training)

For me as a therapist it was sometimes difficult to maintain the strict implementation of an exercise and not to take too many steps forwards.

The most important thing while carrying out the exercises was that compensation strategies were not used.

The therapy started to pay off; it went increasingly better and the number of subluxations decreased. Moreover the quality of life improved because the sisters could accomplish more.

A graph of the number of subluxations is shown below. As shown by the graph, the subluxations have been greatly reduced resulting in Anna now having a subluxation only once every two months and Lieke once a week. 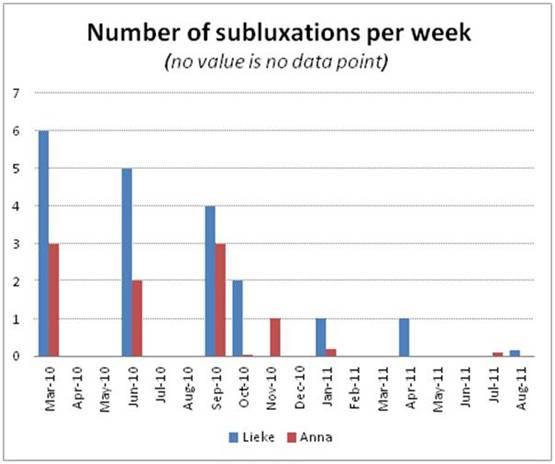 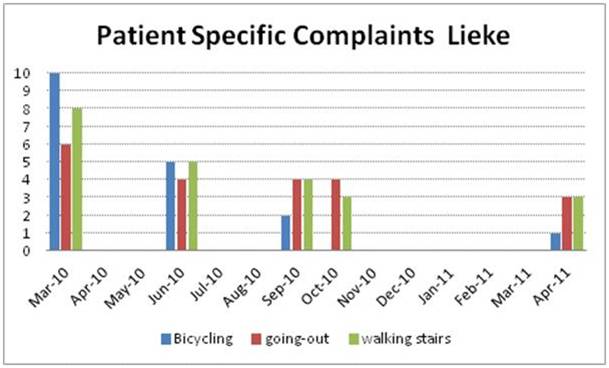 Summarising: a substantial reduction of the number of subluxations and of the discomfort when undertaking activities. 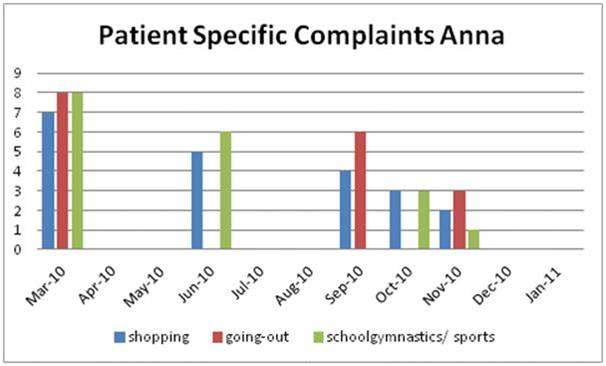